I watched an episode of Cold Case last night, and as per usual, ended up crying on my couch during the conclusion.  I don’t know what it is about Cold Case.  I don’t cry very often, but the show’s writers really got their shit together and aced Pulling Strings 101.  “House” will get me every once in a while too.

But that is neither here nor there, for today is a very important day:   “The Office” returns for it’s 5th consecutive season.   *applause* 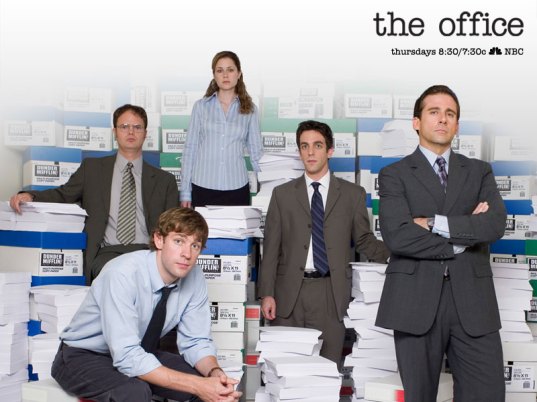 If you ‘don’t get’ the Office, you have no sense of humor.   Or perhaps you just havent worked in an office long enough to appreciate the ridiculousness that Michael Scott brings…..the petty behavior of Dwight Schrute, the practical jokes and facial expressions of Jim Halpert, the hell of secretarial work illustrated perfectly by Pam Beasley….the smug ladder-climbing antics of Ryan Howard!

I wonder what will happen this season.  The engagement of Pam and Jim?  The return of Jan?  Or will Michael fall for the new HR lady?  What about Dwight and Angela?   etc etc.    So tonight is the night…..

But this day is also special for other reasons.  On this day:

in 1929….  the birth of female news anchor pioneer Barbara Walters

In 2001….Saudi Arabia cut its relations with Afghanistan’s ruling Taliban.
Also in 2001, Michael Jordan announced he was returning to  basketball with the NBA’s Washington Wizards.

In 2006, The Louisiana Superdome, a symbol of misery during Hurricane Katrina, reopened for a New Orleans Saints game.

In 2007, Iranian President Mahmoud Ahmadinejad, addressing the United Nations, announced “the nuclear issue of Iran is now closed,” and indicated Tehran would disregard Security Council resolutions imposed by what he called “arrogant powers.”

The good…the bad….every day is a little bit of history.   Thank the powers that be we have all the laughs in between.

“and then I told her, I’ll call you tomorrow, sweetcheeks”

It’s been a long three months without the best show ever gracing my television on Thursday nights.   But sometimes, the long droughts in between make the best things taste even sweeter.

…That’s what she said.