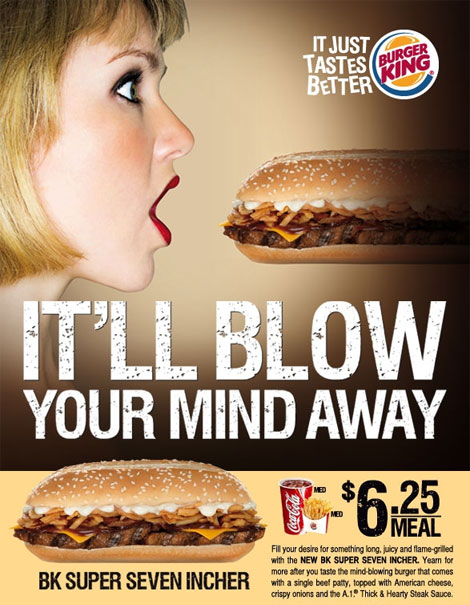 As if we havent merged ‘sex’ with everything else, now we have the “Super Seven Incher” courtesy of Burger King, aka “Home of the Whopper.” This particular ad hit the internet weeks ago but is being marketed in Singapore.

This is not the first time Burger King has used overtly sexual tactics for attention. Several years ago, commercials featuring a near-nude Paris Hilton rolling around on the hood of a sports car, eating a burger while being sprayed down with water.

I am far from conservative, but some things just go unneccessarily far, cheapening their product…if you ask me.

It is so “IN” to be ‘down’ with sexually charged things everywhere. Like all the trashiness and myspace nudity. Am I prude? hmm. maybe.

Is there something that makes you feel raunchy? What do you find over the top, if anything?